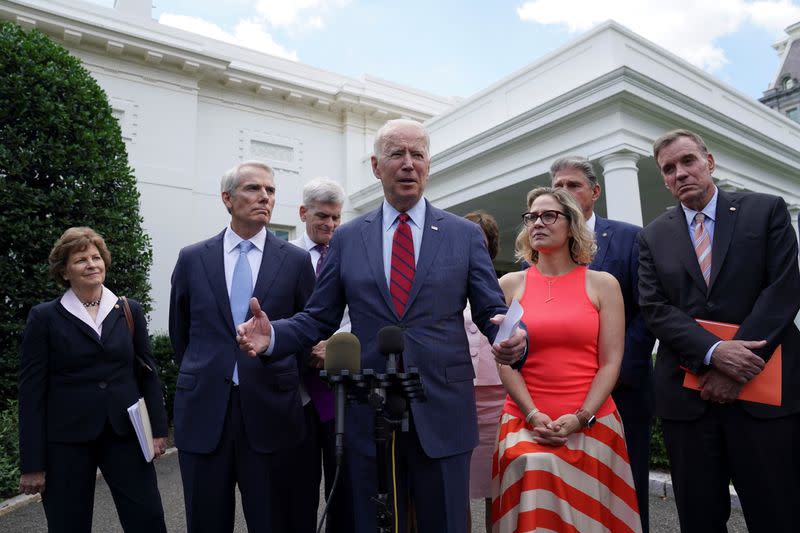 A lucky break? Well, I am not sure what to call this one, but one thing for sure, it was a long way coming, and indeed, the Biden-Harris administration deserved it. So, congratulations! The president today announced that his government and a bipartisan group of senators have come to an agreement on a $1.2 trillion infrastructure deal. This is a rare breakthrough especially after the fact that Washington is experiencing a deep divide and one that will perhaps face a complicated path in congress.

In a separate White House speech, the president said that the deal was “a truly bipartisan effort” and that “There’s nothing our nation can’t do when we decide to do it together, do it as one nation.”

It is a big win for the president as it marks the start of his legislative priorities and agendas and ultimately validates his efforts to bridge the gap and the deep divide in the country by reaching across the political aisle. The president also acknowledged the democrats, who right now have to do the most.

Let’s break it down

First of all, the bill has a hefty price tag, at $973 billion over the next five years, or $1.2 trillion over the next eight years. While this is scaled back it is still something that the administration can work with and fits well within the president’s broader economic agenda.

This plan also includes $579 billion in new spending and it is worth noting that it also has a rare bipartisan backing that could open the door to the president asking for more, in tunes of $4 trillion later.

Speaking during the announcement, the Republican senator Rob Portman said that even though they never got everything they wanted, the bill offered a good compromise. He further added that they had commitments from both the Republicans and the Democrats to get this thing “across the finish line”.

“When we can find common ground, working across party lines, that is what I will seek to do,” said Biden, who deemed the deal “a truly bipartisan effort, breaking the ice that too often has kept us frozen in place.” He further stressed that “neither side got everything they wanted in this deal; that’s what it means to compromise.”

Included in this deal is traditional infrastructure spending on roads and bridges. In addition, according to a White House Fact Sheet released earlier, this deal would also provide the necessary capital to build and expand a national network of electric vehicle chargers. It will also expand broadband, upgrade the nation’s power infrastructure and replace lead water pipes and so much more.

Biden said that while neither side got most of what they were hoping to get, he alluded to the fact that other priorities could be taken on separately in a congressional budget process known as reconciliation. This a process that allows for proposals to be passed without the need for Republican votes. Of importance, Biden also posed a larger-scale infrastructure package which would be done through the reconciliation process, and added that the two are very much in tandem.

“They’re going to move on a dual track,” Biden explained. He further added that he would not sign the Bipartisan deal without the other- the bigger piece. In support of the move, House Speaker Nancy Pelosi and progressive members of Congress declared the same. “There ain’t going to be a bipartisan bill without a reconciliation bill,” Pelosi said.

From the look of things, what Biden is proposing is spending trillions of dollars on broader “human infrastructure” priorities for instance climate change, health-care, childcare, and such and his idea or preference is that they move together on a single track to congress as they work on passing this agreement at the same time. This for the progressive democrats is a positive move and they totally support it as they have insisted before about a smaller deal being paired with a large proposal.

In addition, and just like Pelosi, the Senate majority leader Chuck Schumer also said that “One can’t be done without the other.” Mitch McConnell, the Senate Republican Leader has yet to comment on the Bill, but before the White House meeting, Portman told reporters that McConnell  “remains open-minded and he’s listening”. Portman added, “He hasn’t made his decision.”

A Bumpy Road Ahead

The main problem facing this Bipartisan agreement is financing. Biden has demanded no new taxes should be made to Americans making less than $400,000 while the Republicans were unwilling to raise taxes beyond such steps as indexing the petrol to inflation. Furthermore, Republicans are also opposed to the idea of raising the corporate tax rate from 21 percent to 28 percent, this means the bipartisan team is very cash strapped. It seems all avenues as crossed for the bill as Biden also rejected the proposal to allow gas taxes paid at the pump to rise with inflation, terming this as a burden to the already struggling American Drivers.

It will get even tougher for the bigger piece as it is very likely to include tax increases on the wealthy and corporations, thus tensions are still underway over funding for some republication and business groups.

Speaking about this bill, the U.S. Secretary of Commerce Gina M. Raimondo said that this historic accomplishment will transform the country’s economy. “Today represents a historic accomplishment that will transform our economy, create millions of good-paying jobs, rebuild our country’s infrastructure, and position the United States to outcompete on the global stage. This framework is a momentous step forward in delivering for the American people and will benefit millions of American workers, businesses, and communities. She further added “This framework provides long-overdue investments in some of our most critical sectors that drive our economy, such as a historic $65 billion investment in broadband infrastructure to connect every American to reliable high-speed internet.

This is a win for the president, but, we shouldn’t get excited about it yet! Much work needs to be done and if anything, it sends a clear signal of what lies ahead. Liberal Democrats have been wary of the bipartisan effort terming it as insufficient and that it might cloud Biden’s bigger plan. So it is a lucky break? You be the judge.

This seems like a good plan by the government. Improving the state of infrastructure in the country is a good thing and comes at a good time since the pandemic has highlighted some of the areas as a country we have fallen short. While that is a good thing, there is no telling what the future will look like. Probably, taxes will be added, which means it is about to get tough for the average American. This also means it is time you get the keys to your home before more economic pressures. The Power Is Now is an advocate for the empowerment of the minority communities all around the United States. We engage with various thought leaders to make sure that you are equipped with knowledge about our economy. We have partnered with First Bank to provide you with products and services that will help you better prepare for the future. We are also advocating for first-time home buyers. The Power Is Now can help you make your homeownership dream a reality. Go to www.neverrentagain.com and get started today.